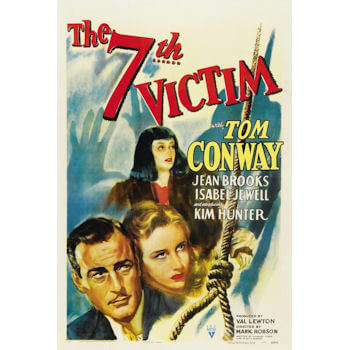 The Seventh Victim is a 1943 American horror film noir directed by Mark Robson and starring Tom Conway, Jean Brooks, Isabel Jewell, Kim Hunter, and Hugh Beaumont. Written by DeWitt Bodeen and Charles O'Neal, and produced by Val Lewton for RKO Radio Pictures, the film focuses on a young woman who stumbles on an underground cult of devil worshippers in Greenwich Village, New York City, while searching for her missing sister. It marks Robson's directorial debut and was Hunter's first onscreen role.

O'Neal had written the script as a murder mystery, set in California, that followed a woman hunted by a serial killer. Bodeen revised the script, basing the story on a Satanic society he had encountered in New York City. Filming took place over 24 days in May 1943 at RKO Studios in Los Angeles.

Released on August 21, 1943, the film failed to garner significant income at the box office and received mixed reviews from critics, who found its narrative incoherence a primary fault. It was later revealed that Robson and an editor, John Lockert, had removed four substantial scenes from the final cut, including an extended conclusion. In spite of its mixed reception, the film became a cult film in England, noted by critics for its homoerotic undertones.

The film opens with the quote from John Donne: "I run to death, and death meets me as fast / and all my pleasures are like yesterday."

Mary Gibson (Kim Hunter), a young woman at Highcliffe Academy, a Catholic boarding school, learns that her older sister and only relative, Jacqueline Gibson (Jean Brooks), has gone missing and has not paid Mary's tuition in months. The school officials tell Mary she can remain enrolled only if she works for the school. Mary decides to leave school to find her sister, who owns La Sagesse, a cosmetics company in New York City.

Upon arriving in New York, Mary finds that Jacqueline sold her cosmetics business eight months earlier. Jacqueline's close friend and former employee, Frances Fallon (Isabel Jewell), claims to have seen Jacqueline the week before, and suggests that Mary visit Dante's, an Italian restaurant in Greenwich Village. Mary locates the restaurant, and discovers that Jacqueline has rented a room above the store, without having moved in. Mary convinces the owners to let her see the room, which she finds empty aside from a wooden chair and above it a noose hanging from the ceiling. This makes Mary more anxious and determined to find her sister.

Mary's investigation leads her to Jacqueline's secret husband, Gregory Ward (Hugh Beaumont); a failed poet, Jason Hoag (Erford Gage); and a mysterious psychiatrist, Dr. Louis Judd (Tom Conway). Jacqueline had been Judd's patient, seeking treatment for depression stemming from her membership in a Satanic cult called the Palladists. She was lured into joining the cult by her former co-workers. Mary enlists a private detective, Irving August (Lou Lubin), but he is stabbed to death while investigating at the La Sagesse headquarters. Judd eventually helps Mary locate Jacqueline, who has gone into hiding. Gregory Ward falls in love with Mary. Jacqueline is later kidnapped by the cult members and condemned to death for revealing the cult. She would be the seventh person so condemned since the founding of the cult (hence the film's title).

The cult members, squeamish about committing acts of violence, decide that Jacqueline, who is suicidal, should kill herself. When she refuses, they let her leave, but send an assassin to follow her. The assassin chases her through the darkened streets with a switchblade, but she eludes him and returns to her apartment above Dante's. She briefly encounters her neighbor, Mimi (Elizabeth Russell), a young woman with a terminal illness. Mimi confesses to Jacqueline that she's afraid to die, and plans to have one last night out on the town. Jacqueline enters her own apartment and hangs herself. The thud of the chair falling over is heard, but the sick woman does not recognize the sound as she leaves for the evening.